You are here: Cyborg5 Home > CY's Tech Talk > Lady Ada tribute in the style of Hamilton

I’m obsessed with the hit Broadway musical Hamilton brilliantly written by Lin-Manul Miranda. It took me two weeks to memorize lyrics to the opening number “Alexander Hamilton” only to discover that my lung capacity wasn’t big enough to actually sing the song at a reasonable pace without needing to stop for a breath midsentence every other sentence.

My other hobby is tinkering with maker projects, open-source hardware, open-source software, 3-D printers, Arduino, Raspberry Pi etc. My hero of the open source maker community is Adafruit Industries founder Limor Fried goes by the nickname LadyAda. It occurred to me somewhere along the way that her life of bucking the system, being a self-starter, hard-working leader and pioneer. There is even a hurricane in her story where hurricane Sandy shut down New York for several days but she kept the business going.

If you browse around YouTube you can find dozens of Hamilton parodies devoted to a variety of people from German Chancellor Angela Merkel to Mr. Spock and some extremely raunchy ones about Donald Trump which I enjoyed. So I couldn’t resist creating a parody of my own devoted to my favorite maker.

I thought about trying to turn it into a YouTube video myself. There are karaoke versions of the music available that people have been using to create parodies. But as a 61-year-old white guy with limited lung capacity, my rapping skills leave a lot to be desired. So I’m just going to publish my lyrics and hope that you could re-create the rhythm in your head that I use when I sing it (badly) to myself.

I apologize in advance if I have exaggerated or misrepresented any real events depicted in the song.

If you never heard Hamilton or if you don’t know anything about Adafruit industries and founder Lady Ada this will make absolutely no sense to you. But if you know about both, I think you will enjoy it. 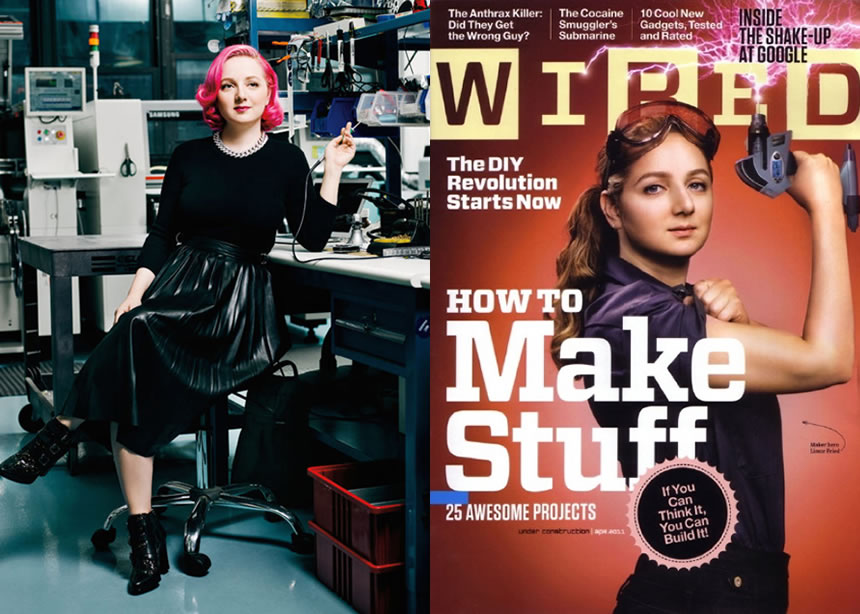 [PHIL T]
How does a pink haired, female, engineer from Israel and MIT,
dropped in the middle of a New York Soho factory
unfunded but undaunted
Go on, to sell, all the parts that makers wanted?

[TONY D]
This open source venture without a venture dollar
Got a lot farther by working a lot harder
By being a lot smarter
By being a self-starter
They say, her favorite coding language is solder

[NOE RUIZ]
And every day while boards were being soldered and carted
Away by UPS, she struggled to keep the stock up.
The maker movement was what she longed to be a part of
The staff worked so hard to fill out every order.

[PEDRO RUIZ]
Then a hurricane came, and Sandy was its name
The staff saw their paychecks drip, dripping down the drain
But she said “Guys do not worry because I feel your pain”
She dug into her checkbook and paid them all the same.

[PHIL T]
Well, the word got around, they said, “This girl is insane, man”
“When selling open-source there is nothing you can gain”
But it turns out education is the nature of her game.
And the world is gonna know your name. What’s your name, girl?”

[BECKY S]
Long ago in her dorm when Mosfet was a kitten
She threw parts into bags and she sold her first kit and
The laser cutter’s stinkin’ up the place, the scent thick

[MAKERS CHORUS]
She bought a HEPA filter so she wouldn’t get sick.

[COLLIN]
She hooked up with a guy named Phil and Phil is still there at her side.
When he speaks of her, you can hear his voice is filled with so much pride.
He’s always sayin’ “She did it all by herself”
Meanwhile tools and parts and kits and boards are flyin’ off the shelf

[PHIL T]
Some say that she’s no engineer. She’s just a face that cute.
But we who know her well know she is so much more astute
She’s always working… Designing her next cool breakout board
A clean design that sells at prices makers can afford.

She’s always reading every datasheet she can get her hands on
Plannin’ for the future see her now and she stands on
The cover of Wired magazine.
A female role model like you’ve never seen.

[MAKERS CHORUS]
Lady Ada Limor Fried
How we love buying parts from you.
They are always top-notch and they always arrive on time.

Lady Ada Limor Fried
When America buys from you,
Do they know what you overcame?
Do they know you rewrote the game?
The maker world won’t be the same, oh

[PHIL T]
She’s streaming live on YouTube
From the Desk of Lady Ada
She’s working on her next design
Don’t ask… It’s still in beta.

We surveyed all her colleagues now let’s listen to the data.

[COLIIN]
I teach with her

[NOE & PEDRO RUIZ]
We printed her

[BECKY S]
I sewed for her

[MAKERS CHORUS]
There’s a million things she hasn’t done.
But just you wait