You are here: Cyborg5 Home > CY's Tech Talk > A Modern-Day Carnac the Magnificent: Bob the Robot

Last night on the weekly Adafruit show and tell video chat on Google+ hangouts maker Mike Barela showed off an ongoing project called “Bob the Robot”. The new feature he added for this week’s presentation was an RFID chip reader he had put on top of the robot’s head. He would then hold up a small card with an RFID chip in it and the robot would do his impersonation of the old Johnny Carson Tonight Show character Carnac the Magnificent. By holding the RFID card up to the head robot, the robot would speak an answer to the question written on the card. Here is the video from last night hangout…

Mike had attempted to recycle some old original Carnac jokes but expressed his frustration that many of them were outdated. That inspired me to write a more current script for the sketch…

Ed iMac Mann: We are honored tonight to have a famed visitor from the East! That famed sage, soothsayer, and unemployed Zilog chip designer Bob-nac the Magnificent.

Bob-nac: [walks on stage tripping over a step and sits down] Buzz click whir.

Ed: “buzz, click, whir”? Is that some sort of computer code?

Bob: No, it’s the names of my kids Buzz, Click, and Whir. Whir is my newborn. I was give them a shout out.

Ed: I have here in my hand the questions… They have been hermetically sealed in a rainbow colored Raspberry Pi enclosure and kept on the steps of Adafruit industry since noon today! No one… Absolutely no one knows the contents of these envelopes! But you in your borderline psychic and magical mystical ways will ascertain the answers to these questions having never before seen the questions themselves is that correct sir?

Bob: Affirmative!
[One by one Bob holds the cards up to his head and proclaims the answer]

Bob: Adafruit
[after each answer Ed opens the envelope and read the question]

Ed: What do you call a charity fundraiser for a sick banana?

Ed: What card game makers play when they aren’t making?

Ed: What did the baseball coach tell the batter who keeps hitting foul balls?

Ed: Where do peeping toms go for a beer?

Bob: I hold in my hand the last envelope…
[Audience cheers]
Bob: May you trip and fall in a giant vat of Lady Ada’s pink hair dye.
[Audience laughs and groans]
Bob: The Harlem Shuffle, Eagle circuit design software, and Angelina Jolie’s husband

In that same video I also showed off a couple of my projects. On the right is the Show and Tell badge that I earned and on the left the Python badge awarded to me for my first Python script despite the fact that I’ve been a programmer for 40 years. It made me feel like a kid again 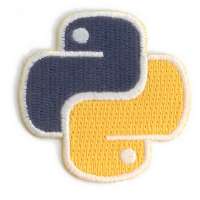 Python programming patch awarded to me by Adafruit Industries 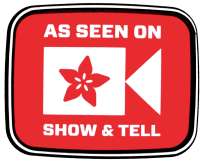 1 thought on “A Modern-Day Carnac the Magnificent: Bob the Robot”