You are here: Cyborg5 Home > CY's Tech Talk > I Can Now Zoom My IPod Touch!

As most of you know I operate my iPod touch using a wooden stick in my mouth. I had to put a metal tip on it to get it to activate the touchscreen but other than that it works really well. The only thing I haven’t been able to do is multi-finger gestures such as the pinch to zoom feature. There are other apps that have special features that require two or three finger swipes that I’ve never been able to do. For example there are some levels of Angry Birds that can only be solved by zooming out.

While doing some Google searches about accessible software I discovered that there has been a feature in the iOS operating system ever since version 5 (we’re now on version 6) called “Assistive Touch”. It puts a little floating icon on your screen that is there all the time. If you tap on it it allows you to do all sorts of different things such as rotate your screen, lock your screen, it’s the home key without using the physical button (which is very useful) and especially it allows you to do pinch to zoom and other multi-finger gestures! Here’s a video explaining the new improved features in iOS 6 regarding Assistive Touch. Here I didn’t even know it was in iOS 5! (Kind of embarrassing for technology geek like me).

That’s all for now… I’m off to finish up those levels of Angry Birds Space that I couldn’t do before.

Those of you who know me know that not only have I built a variety of gadgets both mechanical and electronic to help me deal with my disability, but that I also many years ago helped a friend of mine named Christopher Lee who had very severe cerebral palsy get access to a computer using software I wrote. With new inexpensive controllers like the Arduino and the new Raspberry Pi credit card size computer running Linux, the opportunities for making adaptive equipment for the disabled are going to go through a new resurgence not seen since the days in the late 70s early 80s when the only way to have a personal computer was to buy a bag of parts and fire them together yourself.

But an interesting phenomena is occurring. There seems to be a great disparity in the cost of these devices. On one hand we have the open source DIY maker community designing gadgets and giving away schematics and software for free. On the other hand we have people commercializing these projects and building businesses around them.

I’m all for people getting paid for their inventions even if the invention is designed with  altruistic motives such as helping the disabled, teaching underprivileged children,  or leveraging technology in undeveloped countries. I appreciate that some of these devices are in such small demand that the overhead to produce and sell them is great because they are built by hand and sold in small quantities. On the other hand some amazing work is being done in the DIY maker community that shares its designs and software for free and allows people to adapt it and further innovate it to meet their needs. It tends to make one wonder if the standard business model is really the best way to get products in the hands of people who need them.

Here are couple of examples… In previous installments of this blog I showed you how I showed off my IR remote control for my TV that was built with an Arduino microcontroller. My venue was Adafruit Industries weekly Show-and-Tell video chat via Google+ hangouts. This week’s hangout included a demonstration from a guy named Dino Tinitigan who had showed off some of his robotic projects in the past. But this time he showed a power wheelchair that can be controlled by tilting your head while wearing a helmet. Although he’s invested a lot of his own design work into it, it pretty much is built from off-the-shelf products the kind of which one could buy at Adafruit or other maker supply houses. He’s demonstrating that anyone with a little bit of maker ability and some time to spare can create incredibly useful technology. I don’t know if he is really creating this stuff as open-source hardware and software or if he intends to commercialize it but in either event he’s creating something and sharing it as a demonstration of what is capable and does not seem to be working out of a corporate model. Click here to see the Show-and-Tell video that demonstrates this.

At the opposite end of the spectrum is another device I stumbled onto today. It is called a Tecla device. Click here for details. It allows you to use pushbuttons or joystick or other adaptive devices to control touchscreen devices such as android and iOS phones and tablets. This is an amazing accomplishment even though it doesn’t allow 100% full access it does allow some use of such gadgets. It is Arduino-based so I understand the underlying technology. However it is only available as a commercial product and the cost is $289 Canadian. My initial reaction was Holy $#!+ That’s outrageous! On further review it probably is a reasonable price for a commercially built product with all of the capability it includes. It has a variety of interfaces that are designed to work with pushbuttons and input controls that meet an industry standard for adaptive devices. It includes the capability to use one’s wheelchair joystick as an input device. Given that it has to be designed to work with a wide variety of devices and it is a commercial enterprise I can understand the price. At the point when I can no longer use my iPod touch, I will probably be buying one of these at whatever price they want to charge for it. I’m sure the people behind it are decent people. They describe themselves as not just for profit. And I certainly have no trouble with doing well while doing good as it were. On the other hand… If I knew what I was doing I could build something similar for about $75 worth of parts.

There has to be a happy medium in here somewhere. Perhaps an open source design that demonstrates the basic functionality and would allow others to adapted as needed combined with a fully developed commercial product with all the bells and whistles for those who don’t have a friend who is a DIY maker aficionado to put it together for them.

In my previous post in this blog I gave a lengthy demonstration in an attempt to disprove a recent message that has been making the rounds on Facebook regarding privacy when using the like and comment features. Facebook message says that you ask your friends and family to go through lengthy procedures to secure your own privacy. At the end of the explanation I challenged people to prove me wrong. Much to my surprise at least two people inadvertently did prove me wrong. At least partially wrong.

While everything that I said in the original post was true, there was one other privacy issue that I was unaware of and did not test. Here’s what happened… I posted a link to the blog as a comment on a couple of different people who posted the original Facebook message. People who I did not know commented on my comment and liked my comment. I was able to see their comments and likes. Here’s an image that shows what I’m talking about. The image below shows the original message that I first showed at the beginning of the previous blog. Below that there was a comment from someone I didn’t know but I could see their name and the comment. Then you see where I posted the link to my blog as a comment. Then the person who had commented before both liked and commented again. You can click on the image to enlarge it as always. 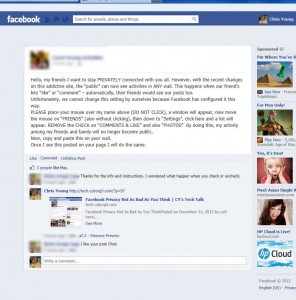 Comments and likes from stranger

Anyone who uses Facebook on a regular basis has seen this behavior but I’ve never really thought about it in terms of privacy. One question that came to mind… Did this person who liked my comment and who commented upon my comment have their profile set to “public” or to “friends”? To verify this I had the BS account go back in like and comment upon the test message from my dad. Here’s what that looks like. Note this is as seen from the BS account in his privacy setting is still “friends”. 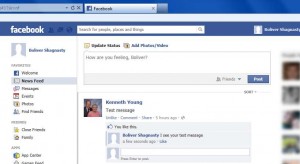 So my original post implied that the only thing you need to do to keep your own information private was to set your privacy settings to “friends”. That is not 100% true. Regardless of what your privacy settings are, anytime you like or comment on someone else’s wall (or presumably images etc. as well) your comments and likes will probably be visible to anyone.

Now I logged into my own personal account. Remember that I’m not friends with Mr. Shagnasty. When I look at my dad’s page I can see his public post titled “test message” and I can see that Boliver Shagnasty has both liked and commented upon it. This is despite the fact that BS’s privacy settings are set to “friends”. Here is what my dad’s post looks like from my account. 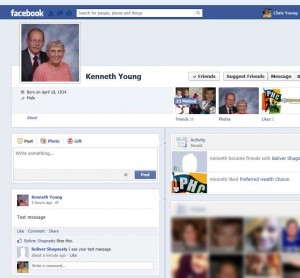 My view of dad’s wall with BS comments

So if you post on your timeline “To celebrate New Year’s Eve I’m going to rob a bank” then only your friends will see it. However if one of your friends writes “What are you doing on New Year’s Eve?” and you comment in reply “I’m going to rob a bank” then it will be public. Or at least as public as your friends post was. This “loophole” that I’ve discovered doesn’t really have anything to do with the wording of that original Facebook warning. The original warning said “… with the recent changes in FB, the “public” can now see activities in ANY wall. This happens when our friend hits “like” or “comment” ~ automatically, their friends would see our posts too.” I still believe that I have proved that statement is incorrect and challenge anyone again to prove me not slightly wrong but completely wrong.

What am I doing for New Year’s Eve? Sitting home updating my blog and watching NCIS on my DVR. At least that’s all I’m saying in public 🙂