You are here: Cyborg5 Home > CY's Tech Talk > How I Sleep Better Thanks to My New IPad

I’ve already chronicled the story of my month-long stay in the hospital last December which resulted in getting a trach and being on a ventilator. The worst part of the experience is that I am not be able to talk while on the vent. Fortunately I only need to be on the ventilator now at night to help me sleep. However the communications issues are still a problem. It’s common for me to need to call my dad in the middle of the night to rollover or to suction out the trach.

My main means of communication with my dad while on the vent consists of messages I type on my laptop. My laptop sits on my dresser next to me on top of my cable box. A long HDMI cable runs from the laptop around the back of my bed and up to the TV hanging on the wall over my bed as can be seen in this image. 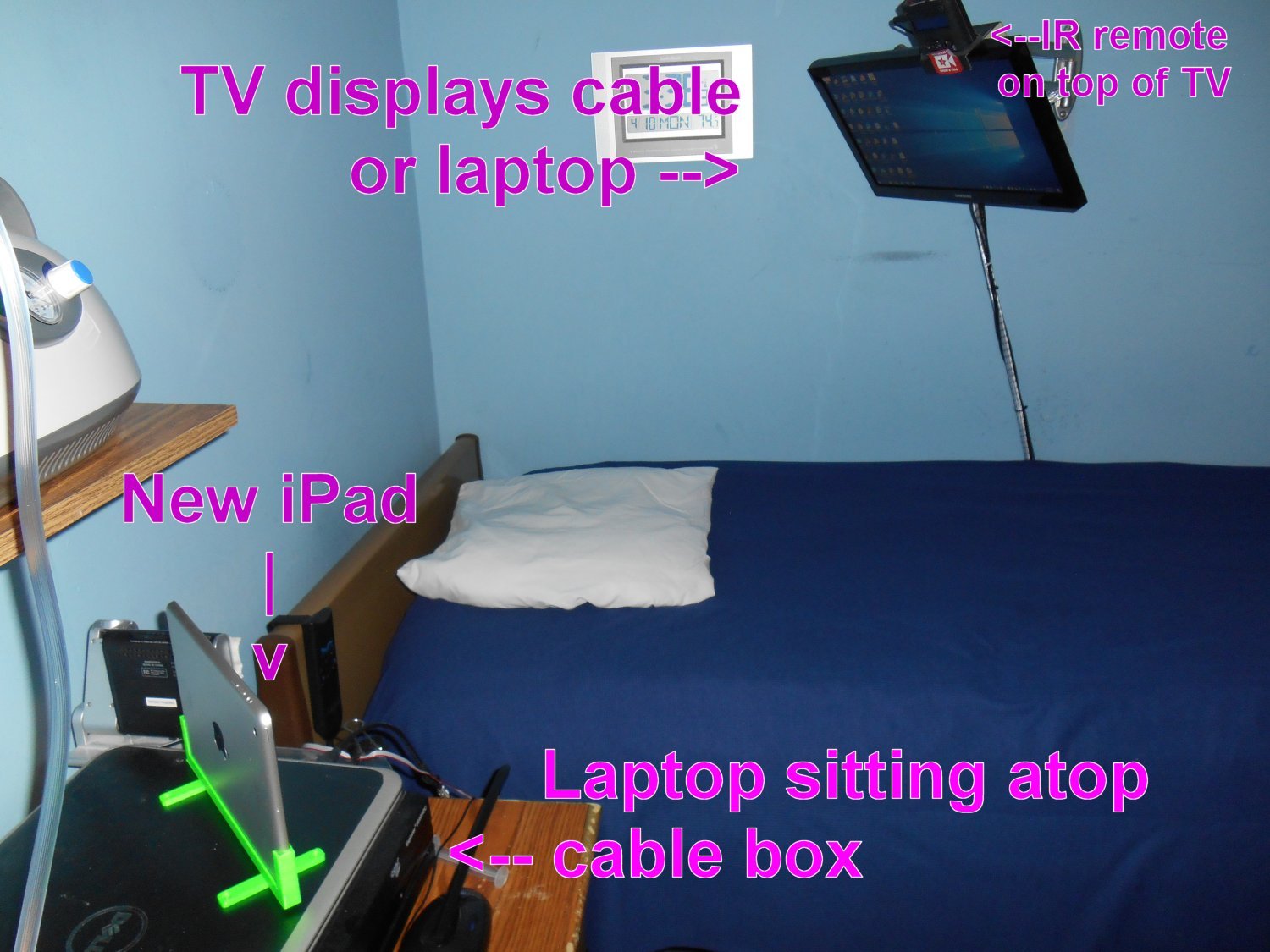 You can click on any of these images for larger versions. There is also an HDMI cable from the TV to the cable box. By switching inputs on the TV, I can either watch cable TV or use the laptop. Normally computer control on my desktop or laptop is via dictation software Dragon NaturallySpeaking but of course if I’m on the ventilator I cannot talk to use the computer. However I have an infrared remote control that not only controls the cable box and TV but it provides mouse control and some keyboard controls for the laptop (mostly arrow keys). The IR control is in the black box sitting on top of the TV.

When I get on the ventilator at about 11 PM each night, I call up a notepad window on the laptop and use the Windows on-screen keyboard. I have it set up in scanning mode and use a single switch on my IR remote to type on the keyboard. I have a couple of files of text with standard messages but then I can type anything I want as well.

The system has worked very well ever since I got out of the hospital late last December but I’m finding it’s uncomfortable to lie on my back all night long. Typically I wake up somewhere between 5 AM and 8 AM and need my vent suctioned. At that point I’m more comfortable if I rollover on my right side.

The problem with lying on my side is that I can’t see the TV monitor to see what I’m typing on the laptop. Also there is a small black box on top of the TV that is my IR remote control. It has a 2×16 character LCD display that I need to see in order to operate the IR remote. I cannot see it lying on my side either.

That meant that if I needed to communicate with my dad while on my side we had to play 20 questions. I can signal yes or no with my facial expressions. If that didn’t work he had to take me off the ventilator and insert my talking valve. I needed some sort of device that both he and I could see while lying on my side.

When I was in the hospital I used Bluetooth switch control to type messages on my iPhone to communicate with doctors, nurses, and family. However the iPhone screen is pretty small so I decided I would buy an iPad. I settled on an iPad mini 2. As you can see in the image it sits on top of my laptop and cable box. I could’ve opened the lid on the laptop but it was sitting at an angle that would make it difficult for me to see. The iPad is a better choice. Also if I’m ever in the hospital again I will use it instead of the iPhone because it has a bigger screen.

My IR remote sits on top of the TV as shown in the first image above. I control through a control box that sits on the dresser next to the cable box. The two are connected using an X-Bee radio. In addition to sending RF signals to the IR remote, it also sends RF signals to a similar device in my dad’s bedroom so that I can push a certain set of buttons and it sets off the alarm to wake him up to tell him I need something. This image shows the interior of that control box on the dresser. It consists of an Arduino Micro, X-Bee radio, Adafruit Power Boost 500C and a Lipo battery. The battery is a backup in case of a power failure. 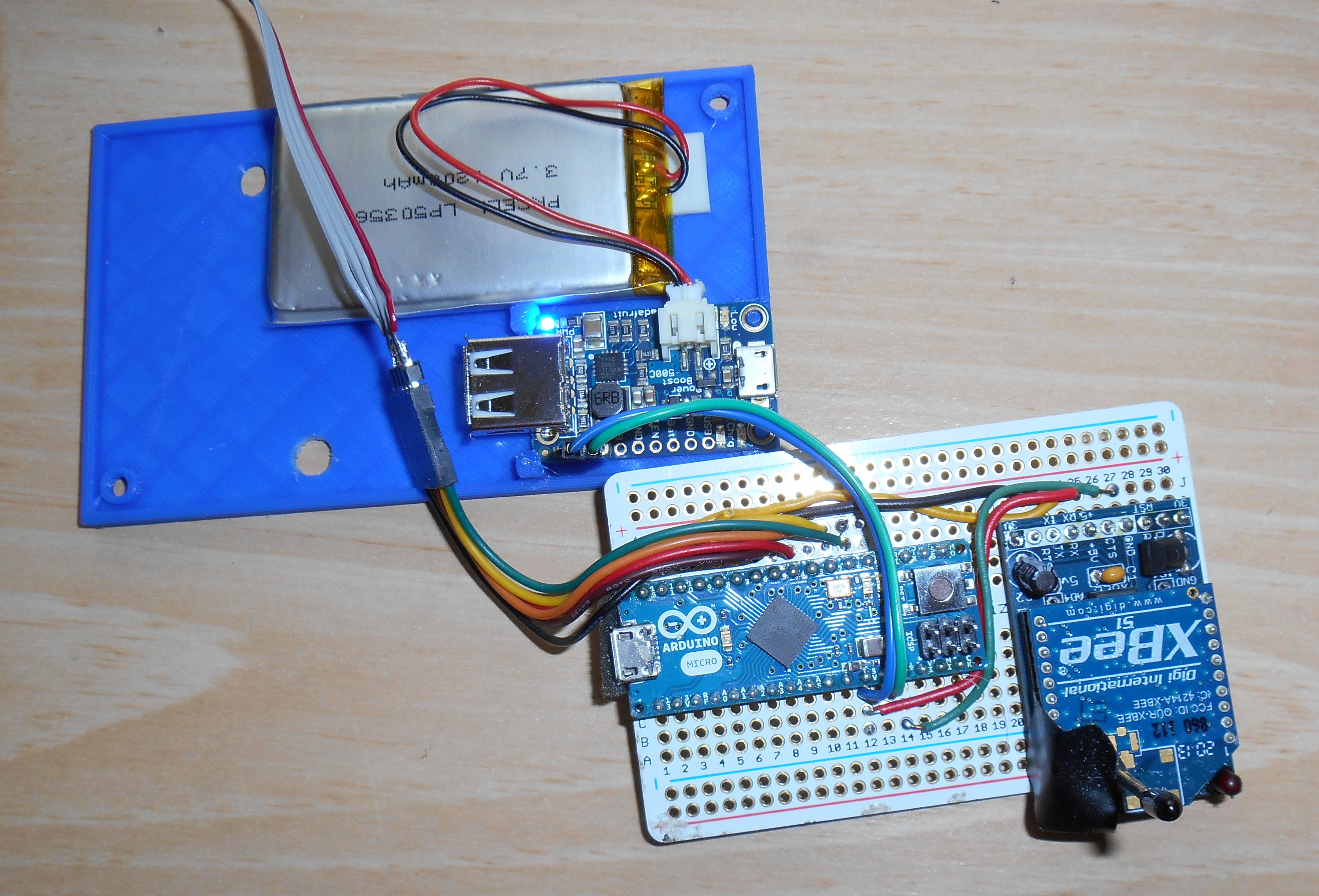 Connected to that box are three micro switches mounted in a 3D printed plastic ring that helps me hold the buttons in my hand.

My friend Yahnatan refers to it as my Dr. Strange Sling Ring. It really made me mad when he called it that. I’m not offended. I’m mad that I didn’t think of it first! In order to control the iPad I would need to add Bluetooth of some kind to the X-Bee/Arduino device. I decided to use the Adafruit BLE SPI Friend. If I was designing the system from scratch I would have used an Adafruit Feather 32u4 BLE with one of their RF feather wings but those didn’t exist when I first built this project. I’ve got everything already designed around a 5 V device and the X-Bee RF system. I also didn’t plan ahead thinking that I would someday need to attach an SPI device like the BLE Friend. Unfortunately I had already used the dedicated SPI pins on the Arduino Micro for other purposes. Fortunately the Adafruit Bluefruit software library has an option for software SPI. It will allow me to use any set of six pins to connect the device. I was pleasantly surprised that that feature worked right out of the box.

I have the software configured so that if you press all three buttons simultaneously for more than one second it toggles between IR mode and Bluetooth mode.

The only remaining task was to make a 3D printed stand for the iPad. I wanted something that would hold it perfectly straight up and down 90°. It had to be stabl enough that it wouldn’t knock over to easily but I wanted to be able to fold it up so it would lie flat for transport when not in use. Should I ever end up in the hospital again I would be using this iPad rather than the iPhone to communicate with doctors and nurses.

The photos below show my 3D printed stand. The legs are not solidly printed on the long beam. They are attached with 4-40 machine screws so that they can pivot 90°. I’m still a little bit concerned that it may be unstable. I tried to make 3D printed suction cups using Ninja Flex however the rim of the cups was not smooth enough to make an airtight seal. I ended up buying some suction cups from Amazon but they have not arrived yet. I’m not sure if I’m going to install them or not.

One other item to share… I must’ve been using some really cheap PLA plastic that was very stringy because as the stand was being printed there was an unusual amount of threads connecting the two uprights. The end result looked like some sort of weird tennis net. I’ve never seen threading this bad. Of course it was easily broken off and removed but I thought it was so bizarre I had to share it. I been using the device for a couple of weeks now and it works really well. It allows me to not hesitate to roll over on my side where I can sleep more comfortably and know that if I need to communicate with my dad I can do so easily.

I talked about this project on the weekly Adafruit Show-And-Tell video chat. You can see that video by clicking on the icon on the right.