One of the nicest features of Fusion 360 is the ability to bring in components from other designs via a link into your current design. Then if the linked component gets updated, you can easily get the latest version for your project which imports that item. I’ve been building up a collection of designs of electronic parts that I use in my projects such as Adafruit Feather boards, sets of header pins, and other discrete components such as IR receivers and jacks and plugs. After laying out all of the components in Fusion 360, it is then much easier to build a 3D printing enclosure around those components. It also allows you to create really nice looking renderings of the project when writing tutorials.

Unfortunately when it comes time to share my open source designs with the world, it’s very difficult to save these Fusion 360 designs to my hard drive to later be uploaded to GitHub or Thingiverse. Fusion 360 stores its files in the cloud under your account most of the time. It does have the ability to save a design to your hard drive but not if that design contains linked components. If you try breaking the links it can create reference errors especially if the linked components themselves contain linked subcomponents.

There is a workaround however. 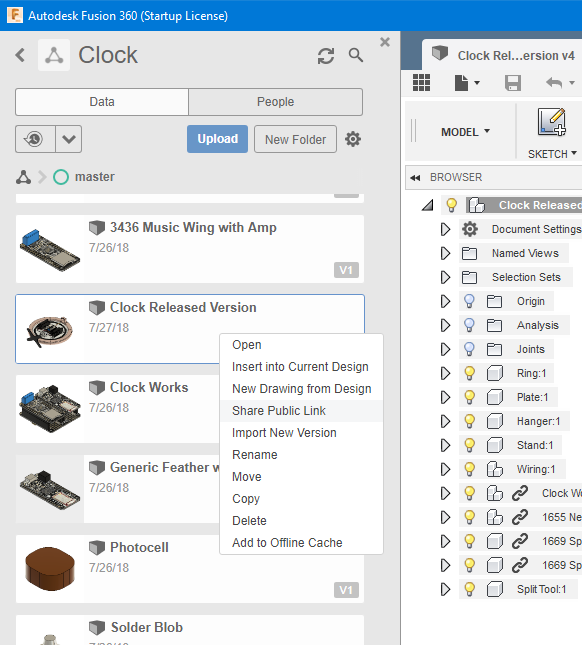 This will bring up a dialog box. You should check “Share the latest version with anyone using this link” and check on “Allow item to be downloaded”. Then copy the link and paste it in your browser. 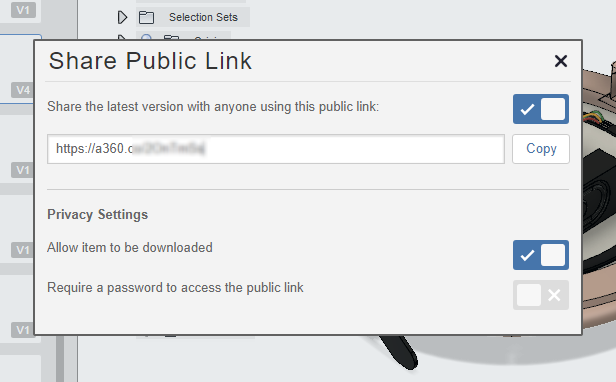 Your design will come up. In the upper right corner click on the “Download” drop-down and select “Fusion 360 Archive”. You will then be prompted to type in an email address and they will email you a link allowing you to actually download the file. 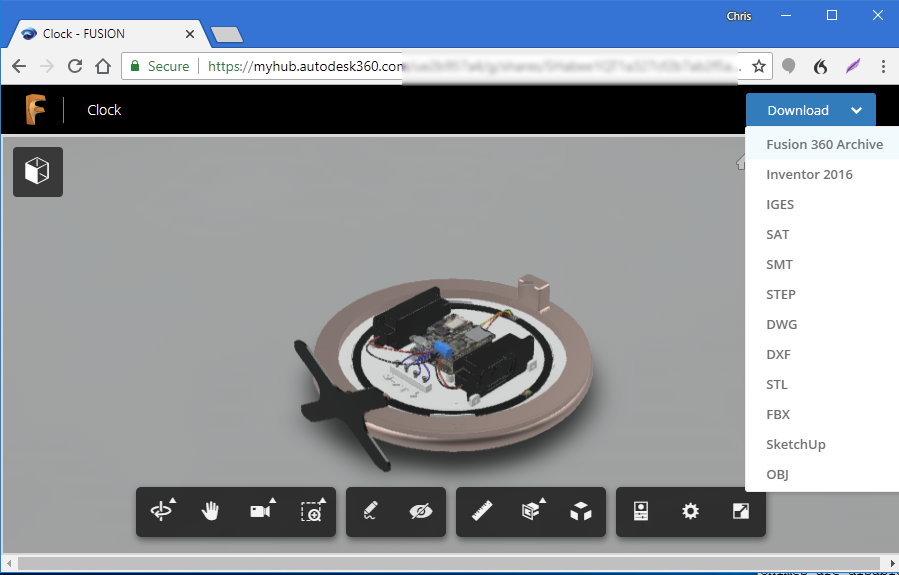 When your email arrives, you will have a link to the file that you can click on and actually download the file. The file format will be in “project.f3z”. Now that you’ve got the file, if someone else needs to open it, it doesn’t just open directly as you might hope. To import one of these files, you need to create a new project. 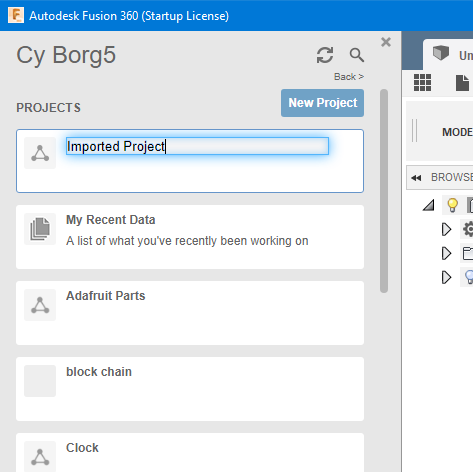 Open the project and at the top of the screen you will see an “Upload” button. It is called upload because all of Fusion 360 files are stored in the cloud under your account. 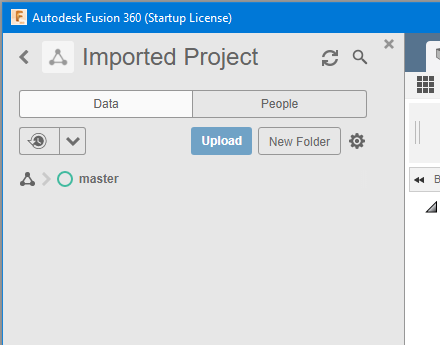 You will then get a pop-up dialog box that allows you to either drag-and-drop the file onto the dialog or browse your hard drive to select your file to upload. After a few minutes the file and all of its linked components will be uploaded and imported into the new project. 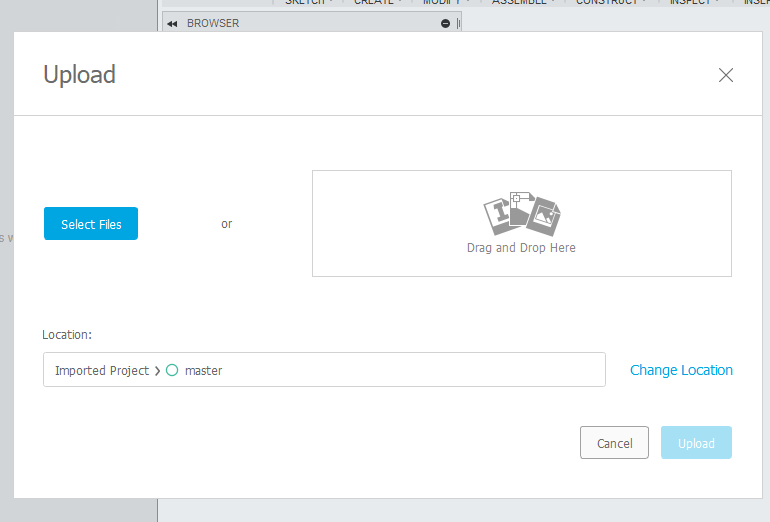 Nobody asked me, but it seems ridiculous that Autodesk makes you jump through all of these hoops. They ought to just allow you to do a “Save As” switch to word to your hard drive and have it create the f3z file directly. But at least this does solve the problem until Autodesk gets their act together. 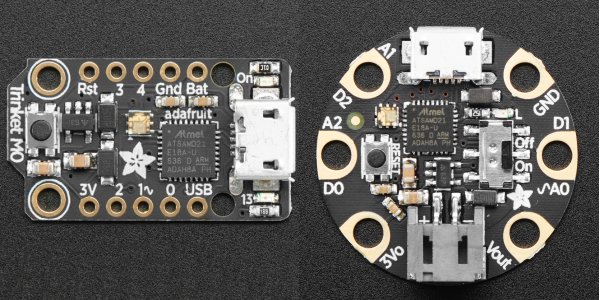 There used to be a humorous TV ad for the Yellow Pages. For those of you too young to remember, Yellow Pages was a printed telephone directory full of advertisements for various businesses. You had to use these before there was Internet or Google. In the ad, a salesman was trying to sell a Yellow Pages advertisement to a business called “Don’s Rug”. It was a business run by a guy named Don who had a rug for sale. Singular. Just one rug. It wasn’t “Don’s Rugs”. He didn’t want to advertise because then someone might call him and want to buy his rug. Then he would be out of business. Then the voiceover said “Unless you don’t want to have any customers like Don, you should be advertising in the Yellow Pages.”

The ridiculousness of the example is what proved their point. If you want to sell your product you need to make it easy for people to find you and to purchase the product. Otherwise why did you even bother going into business?

Apparently some people in the assistive technology business must be a lot like Don’s Rug. For some reason they aren’t very anxious to get people’s business. Let me explain what it is I’m trying to purchase.

I’ve always been disappointed that Windows 10 doesn’t have switch control features to the extent that Mac OS or iOS devices have. I’ve never been a big fan of Apple. I only reluctantly purchased an iPhone because I needed the switch control features. Even though Android has made progress in that area, it still isn’t anywhere near what’s available in iOS. With the exception of the on-screen keyboard it Windows 10 that only supports single switch not dual switch scanning, there just isn’t anything in Windows 10. It’s nice that the latest update has built-in support for eye tracking but I don’t want to do eye tracking.

So someone recommended I check out some software called Grid 3 sold by a company called Think Smart Box. It’s a general AAC communication software the duplicates some functions you would see in speech generating application such as Cough Drop. But all I really want is to use it for its ability to control a Windows PC. Cough Drop can’t do that. It’s just four generating speech. So I go to the website for Grid 3 and they don’t have any prices. There is a form you can fill out to get a quote. Right then I knew it wasn’t a good sign. But I thought I would humor them and asked for a quote.

Two days later I get a nice email explaining that they don’t do direct sales. They only sell through dealers. I appreciate the fact that many users need a lot of support. They want to bundle switches, other input devices, need training setting up communication screens etc. etc. But I just want to control my Windows PC and I’m perfectly capable of installing it all myself. Not only do they only sell through a dealer network, they don’t have a dealer in the state of Indiana. They referred me to a dealer in Wisconsin. What? They don’t even have someone in Chicago, Cincinnati, St. Louis, Cleveland. Basically I told them thanks but no thanks. It’s bad enough that they won’t tell me what the software costs. Add to that they don’t want to sell it to me directly. I told them they lost a customer with their stupid policies.

I will leave it as an exercise for the reader to speculate why they would have such a policy. Perhaps they really are like Don’s Rug and don’t want to sell their product. Or perhaps they’re more concerned about lining the pockets of their dealer network then they are providing their product to the end-user. Just a couple of possible explanations.

Meanwhile I’m 3D printing a bracket that will hold my iPad Mini 2 on top of my TV monitor so I can watch TV and/or use my Windows laptop as a computer and then use the iPad for communicating while I’m on my ventilator. Just another way that the whole AT system is broken.

Epilog: I did eventually get another email reply from the company. The tone was pleasant and apologetic. They do offer direct sales in the UK but not the US. The software is $735. While that’s pretty steep, given all of the capabilities it’s not completely unreasonable. But I really only need it for a small portion of its capability and I’m not really sure it’s worth it. I will have to consider it as an option. The email explained that most of their purchases are through Medicare, Medicaid or other insurance providers. While it offers some explanation, it just furthers my contention that the system is badly broken.